I’m just going to preface this entry by showing you the notes I jotted down about this thing when I started drafting:

2) MY CUNT WILL NOT HAVE IT

4) It’s 100% medical grade silicone, so while that means it’s awesome for putting in my electric kettle, it won’t have anything to do with my bottle of Wet Platinum.  Because of the shape, it won’t have anything to do with my vagina.   But because of the material, it does as much as it can with every fuzzy, dust and hair-related particle in my room.  But that’s actually not so bad, because I can just pop this sucker back in my kettle and boil it before I get down with myself.

So those were my first impressions of it… and no, I don’t generally write my notes in allcaps, if that tells you anything.

I’ll explain each of these, obviously.  And then I’m going to tell you why it’s my new favorite toy. 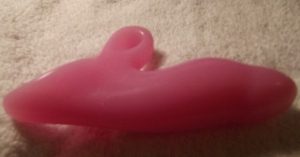 1)  I tend to do a lot of research before purchasing toys.  When Epiphora mentioned that Jollies was going out of business and that JT’s Stockroom still had the Valentine’s Jollie, I spent a good ten or fifteen minutes chewing my nails and reading several reviews that she linked to determine whether I wanted to spend this money before the Jollie went off the market forever.  There were some warnings posted, and the Stockroom site even offers dimensions for the product, but I’m totally inept at putting those numbers to a visual.  The only time I felt like I really saw the Jollie at proper scale was in the Wanton Lotus video review of it… and I promptly cried, “It’s HUGE… I have to buy it!”  I’m not a size queen.  In fact, I have spent the vast majority of my life being the opposite of a size queen, because my sex with Ex generally always resulted in some spotting afterward.  (His girth wasn’t the only reason, but it was a significant contributing factor.)  But this dildo was a really cool idea, and it was going off the market, and I was seduced by the idea that I would have something that no one else could get soon.  (I’m petty, sue me.)

So the Jollie came, and despite the videos and the warnings, I took it out of the box and I was like, “WHAT?”  Like I said, it’s pretty beastly.  If you check out the photo on my preview post, you will find that its girth dwarfs pretty much every other toy there.  The only adjective I could think of for the shape in my image description was “misshapen,” which is a considerably less-than-stellar word to use when you’re talking about a toy that you actually like.  You will find that this fucked-up shape is actually what passes as “ergonomic” in the world of things that you stick in your vagina.  That’s right – the word ergonomic is no longer limited to office supplies.

2) My first attempt at fucking myself with the Jollie was somewhat less-than-stellar.  I tried to insert it while I was chilling out in my desk chair.  But here’s the thing… I have this bad habit of ejecting my tampons when I sneeze.  Without any sneezing necessary, my vagina forcefully expelled this thing as if it were a tampon.  The g-spot bump did absolutely nothing to keep it inside me.  The Jollie was an expansive foreign body, and my twat wanted it out.

3)  While pondering over why the Jollie wouldn’t peacefully occupy my vag, I briefly speculated that maybe I had too much lubricant.  Bullshit!  There’s no such thing as too much lubricant!  Besides, every time I ejected it, it was practically dry.  The third time I had expelled it after coating it up with yet another layer of water-based lube, I began to wonder if more drastic measures were in order.  Virgin sacrifice?

Now I’m going to tell you why I’m so happy about owning the Jollie:

I had a literally hands-free orgasm in less than ten minutes.

After my initial, unsuccessful voyage into the world of the Jollie, I took advantage of a moment of extreme arousal later that evening.  I discovered that laying flat on my stomach kept my crotch from ejecting the Jollie immediately!  I was then free to try all the things that people said you should try with the Jollie!  In lieu of thrusting (which you aren’t supposed to do), I tried tapping or nudging it, and that was okay, but… you know, whatever.  I’m not going to call my mother and rave about the magic that is tapping the Jollie.  Something I might consider writing home about, though, is tightening my pelvic muscles around the Jollie.  Because the Jollie was made from molds of the vaginal cavity, it’s pretty filling… and so when I squeeze this thing, I notice.

If I put a pillow between my legs (since I don’t have any Liberator furniture), I was able to sit up and shift my hips while clenching my PC muscles.  This is a type of “tapping” that’s much more my speed.  I got the satisfaction of humping something with the pleasure of having the Jollie nudged around inside me.

Next I did something that any self-respecting sexual hedonist would do – I pressed the Wahl up against the Jollie and humped the hell out of it.  (Okay, that’s the last time I say “hump” in this blog post.  I can’t take it seriously.)   I highly recommend this if you like being on top, because I had a hell of a time.  Unfortunately, circumstances that totally harshed my boner (like living with someone that constantly distracts me with everything but sexual pleasure) kept me from getting off, but you know, that’s okay!

Because I got out the Jollie the next day when I was deliciously alone.

I don’t have a very special bullet.  It’s attached to a little remote with a cord, it takes two AAs, and it came in the pack of toys that also contained my jackrabbit and the Mini-Mite.

It doesn’t need to be special.

With the bullet on its highest setting, clenching around the Jollie and rolling my hips in my chair so that it was pushed around inside me, I came.  My hands were on my desk and didn’t move the entire time.  With no hand effort on my part, I had a glorious orgasm that built from my toes up into my genitals.  I couldn’t believe it.  There were at least five minutes of  blissful afterglow.  And amusingly enough, I was sitting there, post-hands-free-orgasm, feeling like my vag really didn’t have room for the Jollie.

This is different from the way I felt the first few times I tried to insert it, because my vagina’s reaction to the initial insertion was  along the lines of, “Oh fuck no, get this thing out of me!”  My vagina’s reaction to the Jollie post-orgasm was little bit more like, “If you take this out, I quit.”  I sat there for several minutes, waiting for my cunt to stop clinging to this thing, and it just wasn’t going to happen.

So I had a second go with it, with the addition of the Wahl.  (One might say that I have a tendency to take things to excess.)

When I stood up, I walked like a newborn foal.  The Jollies Jollie: may cause impaired movement.