I’m delighted to announce that I’ve begun a review relationship with Sportsheets, because there’s nothing that motivates me to get back into the bedroom more than godawfully kinky shenanigans. This month they sent me the Sex & Mischief Red Leash & Collar set and the Sex & Mischief Red & Black Striped Flogger. 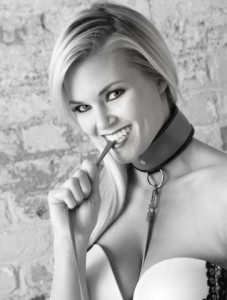 I was disappointed by the collar because it didn’t fit my neck. It fit my husband’s neck, but there was no way it was getting around mine. Strangely, even though Sportsheets provides the length of the leash in their product listing, they don’t say anything about the length of the collar. I guess that a long leash is more important than a collar that fits…? I don’t know, come on Sportsheets, fix that shit. Like the last collar I tried, this collar is pretty tall to keep your head up and restrict your movement. (Maybe it wouldn’t for people with longer necks?)

The product itself isn’t bad, it’s kind of plush, which is a step above the last collar I tried. In fact, I’d say that overall this collar gives the sense of being a little better-quality than Toyjoy collar from my last post. Sportsheet’s collar is thicker, more flexible, and it looks nicer in the front.

The collar fastens with studs that work like buttons. It’s weird, but not entirely unmanageable. The fastening method definitely looks better than your standard buckle that you find on most collars, because it’s not clunky at all… in fact, it’s kind of stylish. The biggest problem with the stud-buttons is that they may be harder to fasten or unfasten for people who have trouble executing fine motor skills with their hands. 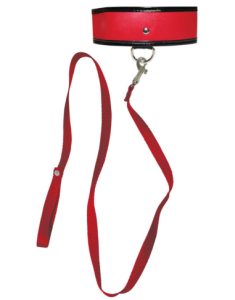 Ruling on the collar: If you’ve got a neck on the thinner side of average, this collar should fit you. I can’t speak for how it feels on the neck, so I can’t give you any information about extended wear. It’s not the worst collar I’ve ever owned, but it’s also not the best. The best was an $80+ fur-lined collar made of real leather, and is an entirely different beast than anything you’ll find from the Sex & Mischief line. Sportsheets’ aim with the Sex & Mischief line seems to be bringing affordable kink into the bedroom with prices that are non-threatening to beginners in the BDSM scene. The materials don’t feel quite as cheap as you’d expect a $12 collar to, and the red color is nice. You’re paying pretty much entirely for the collar, because the leash is the equivalent of a $1 strip of nylon (I think it’s nylon?) that you can get as a dog leash from a dollar store. 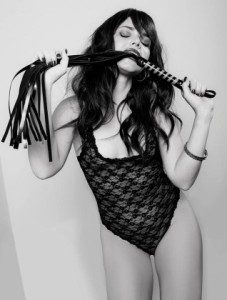 We had a lot of fun with the flogger. It’s faux leather, and the red and black color scheme is nice. As much as I would love to have a cute pink flogger, the red and black appeals to the classic goth part of me and it looks awesome in my bedroom, because we have red walls.

It’s a 32-inch flogger, so you have to be careful not to flog yourself in the back when you’re rearing back to hit your partner. Or maybe you’ll do that on purpose, if you’re into pain too. It’s up to you. Or maybe I’m handling the long flogger the wrong way and there’s some secret to not flogging yourself in the back that I have yet to discover. I am by no means an expert. Learning to use a flogger properly has been an adventure and I’m still practicing. The finer points of maneuvering a long flogger have escaped me, so most of my strikes are still kind of half-assed, leading my husband to prompt me with lines like, “You swish and flick it, it’s levio-SAH not levio-suhhhh!” and, “Now hit me like I’ve been bad! Hit me like I took away all of your sex toys!”

Sidenote: It’s really hard to flog someone when you’re laughing too hard to stand up straight.

Anyway, the Sex & Mischief flogger hurts so good on the receiving end. It’s mostly a sting-y sort of flogger, I don’t feel like the materials and length are right to get a very thuddy flogging out of it. It’s definitely the most effective flogger in my collection; I have three, and the other two are short. 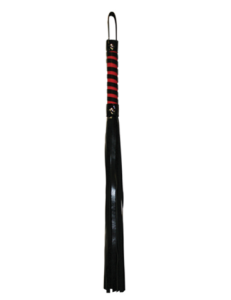 Ruling on the flogger: I like it a lot. I don’t have much to compare it to, but if you’re just getting into being flogged, I think it’s a very nice toy to start with. It’s only $14 in the Sportsheets shop, so it won’t break the bank if you don’t like it. Neither of us flogged the other person hard or long enough to leave distinct marks on the skin, so I can’t give you much input on how those will look. I encourage you to try to discover that on your own. You can do anything you put your mind to. Go forth and beat the shit out of a consenting partner.

Thank you, Sportsheets, for providing me with these toys in exchange for an honest review!