There is a tiny part of myself I buried for years. I didn’t realize I was doing it… it’s kind of like when you forget what used to be your favorite song. You just don’t hear it for a while. You don’t think about it, or when you do, you can never go listen to it at the time, for whatever reason. You definitely have had other favorite songs since then. One day, you are standing in a grocery store, fondling the watermelons and bananas with your characteristic overzealous lechery, hoping to make strangers uncomfortable while you try to remember how to tell if melons are ripe. Your old favorite song comes on the speaker, and as you catch the familiar strains, you yell, “Oh shit y’all, this is my JAAAAAAM!” and then you’re dancing in the grocery store and they ask you to leave because you have made two children cry. (True story: one time I inadvertently made a kid cry when he accidentally saw my boobs. But that’s a tale for another time.)

Anyway, the song thing, that’s what happened when I had my subsurgence, which I define as a rushing resurgence of submissive feelings that you thought you weren’t into anymore.

This is different from the time my ability to be physically aroused was missing for over two years, which I liken more to when you heard a song on the radio a bunch in childhood, but can’t remember any identifying characteristics that would help you look up what the song was, so you just kind of muddle along wondering if you’re wrong about how it sounded, or if it’s your musical Candle Cove, until one day it comes on while you’re walking down the produce aisle, distracts you, and suddenly you are having feelings in your pelvis telling you that you just slammed your vulva into the corner of a fruit display. You’re like, “Oh, shit, it’s Carmen Songdiego!” You couldn’t remember the song until now, you just knew it existed somewhere out there, probably.

The subsurgence is actually weirder than the returning arousal. The arousal induces bittersweet thankfulness. The subsurgence is weird because I thought those desires were shelved, collecting dust, never to be touched again, until something funny happened.

Funny things happen sometimes in the information age. Like when you friend somebody on Facebook and discover they’re friends with someone you know from another country that doesn’t run in any social circles you both share. Or you and your best friend or partner message one another from totally different places about the same thing at the same time, totally unprompted. Or you say you’re romantically monogamous, hate country music, you’ll never do long distance or date cis men again, and then like 20 days after you meet a cis dude who lives in New Zealand, the realization sinks in that you’re in bed listening to country songs that remind you he’s your boyfriend.

Anyway, this particular funny thing that happened was that I met said boyfriend, whom I’ll call Root, for the sake of some vague semblance of privacy on the blog. Root not only unshelved and uncorked the bottle of my submission, but took the time to shake it up so that everything that had settled at the bottom mixed back in. Suddenly, combined with my bodily arousal being available to me again, the discussion of submission sent a churning flow of molten lava coursing through my pelvis. I’ve grown a greater appreciation of domination over the past decade, but the arousal from submission remains unlike anything I’ve ever felt. 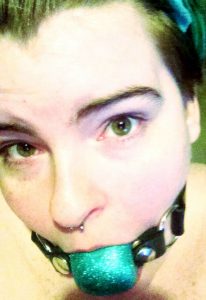 Suddenly, I wanted to be a fucktoy again. I was finally back to feeling arousal at the idea of having my hair pulled, my ass slapped, and being verbally put in my place. To be conquered and subjugated. To be teased until I said the filthiest, most desperate things. To worship reverently, to have no secrets or experiences of my own because I’m being mind-controlled through the use of pleasure, temptation, and an extremely persuasive degree of dominance. To be exhibited, mildly humiliated, and be driven further and further into the maelstrom of my desires, fueled only by the throbbing need consuming my entire body. To be forced to come until I cried and begged to stop. No more words. No more thoughts. Just my entire being dissolving into screams of agonizing ecstasy.

My entire life was almost entirely devoid of dominants, except for a very short-lived online play partner and a long distance girlfriend I had tons of phonesex with. It has been a decade of having to always ask people for spankings if I ever want one, or having to tell someone that I like being called a slut, then hearing them say it, but not feel completely comfortable with it. A sub, sub-heavy switch, or vanilla person topping me just to be accommodating results in a level of uncertainty and general lack of enjoyment that bleeds through the scene, for me. I become self-conscious while I’m trying to submit in that circumstance. I do not get submissive arousal from someone doing something they don’t enjoy just to serve me. So I started thinking I just wasn’t into subbing anymore… but then I met Root.