I was privileged to obtain a copy of Courtney Trouble’s Live Sex Show, and I’ve had it for quite a while.  With all of the mental health hoo-ha that came up last few years, it’s no wonder that I never got around to reviewing it in a timely manner, and so when I glimpsed the DVD in one of my bins of sex stuff, I was like, “Oh shit!” So here we are in 2015, with me finally reviewing this film.  I apologize from the bottom of my heart for its lateness.

On the whole, I really like Live Sex Show. It’s sexy, the performers are clearly into it, and it covers a range of sexuality. Would I recommend it? Absolutely.  What follows is a description of the scenes, but my descriptions can’t come close to capturing the awesomeness that you experience when you watch it.

Kimberlee Cline starts off the film by performing a strip tease and solo scene. She wears a crotchless fishnet bodysuit, and goes from 0 to 60 in a very small amount of time. It’s a short, sweet, and sexy.

Peter Devries and Jolene Parton have very organic sex. It’s flowing, and doesn’t have a lot of noise other than moaning. The scene progresses naturally, and it’s filled with kissing and cuddling. I don’t have a lot of commentary about it – it’s not particularly hardcore because they don’t open up for the camera. It just looks like comfortable, intimate sex, which is something I can really appreciate since you don’t see that much compared to mainstream pornography.

Tina Horn and Roger Wood are next up. Their scene begins with some impact play – a nice hard spanking and some flogging with what appears to be a leather flogger. Roger wields the flogger expertly, and I was really impressed with how he handled it once he got warmed up. The two use a strap on for some rough sex, and watching them fuck is glorious. Her ass ends up bright red, and Tina’s expressions really capture how she’s riding the line between pleasure and pain. One reason I love this scene is because there’s a lot of smiling and laughing. When they stop because they think they’re out of time, they’re told they can go on and so they get back to it and have more sex. Their enthusiasm is fantastic!

There is a steady stream of back and forth that goes on during the Nina/Jiz scene. My favorite exchange is when Nina gives Jiz a Magic Wand. Jiz asks Nina to tease them at least once before allowing them to orgasm, and Nina says, “Oh, if you wanna do that then, no, fuck you!” as she yanks the Magic Wand away.

Then the Courtney Trouble gangbang starts. Jiz, Nina, April, Tina, and Roger all fuck Courtney, blindfolding them and piling on top with strap-ons, gloves, and the Magic Wand. Nina comments on how strong Courtney’s muscles are. Someone plays off that comment and makes a joke about it being horrible for anyone that tries to rape Courtney. That killed my boner a little bit. Nina says, “Consensual rape,” possibly trying to tone down the joke, but that didn’t help me get it back up. I’m sure some people probably wouldn’t even have noticed, but it stood out to me because I don’t think comments like that are funny, even when they aren’t threatening in any way. I imagine that some people who hate rape jokes wouldn’t care because it wasn’t a joke that framed rape in a positive light. I cared.

Courtney Trouble and Carol Queen did a great job putting this together. The performers have great chemistry, everyone looks happy, and it’s hot as hell. All around I’d say it’s a win involved for everyone: the organizers, the performers, and viewers like you. If you haven’t seen it and you like the other work of any of the stars involved, I give it a 9 out of 10 and think you should buy it right now.  It’s $15 on Courtney Trouble’s web store!

As a note, if I have misgendered any of the stars of this film, please let me know in the comments so I can revise my writing.  Some of the participants don’t have much information about them on Courtney Trouble’s site or IAFD.

Watching myself blowing you
Review of Showtime’s Submission 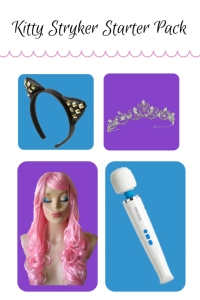