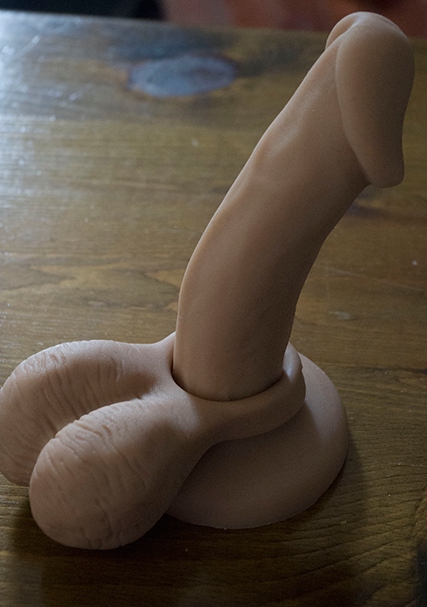 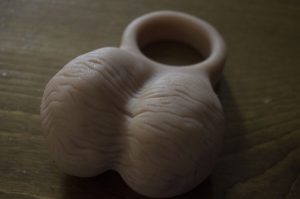 Packers are very special to me.  As someone who has always wanted a penis, nothing gives me more glee than having my own dick, however fake it may be.  New York Toy Collective is a sex-positive novelty company that was founded just last year.  Their products are made from premium platinum base silicone and are intended to be self-affirming gender expression tools.  SheVibe was kind enough to send me the Shilo Pack & Play and The Love Bump.

The Shilo Pack & Play is a dual-purpose packer that can be worn for packing (obviously) or for sex. The Shilo seems to be dual-density, with a bendable rod hidden beneath the firm inner core. This rod allows you to position the Shilo however you like: straight forward, curved up or down, hanging a little low and to the left… whatever suits your needs. The Shilo isn’t the first packer to be posable, but that level of posability seems kind of ingenious for an insertable toy. I’ll talk about why I emphasize seems in a moment.

My first impression of the Shilo was mixed.  On one hand, it’s cool as hell, there’s no denying that. On the other hand, I was astonished by just how large it was, and the base seemed pretty huge. Trying to wear the packer without a harness didn’t work for me because my front isn’t very flat, so the base stuck out and created an unnatural, decidedly un-dick-like bulge in the front of my panties. I’m forced to wear this thing with a harness if I want to wear it comfortably or leave the house in it. Fortunately, I have my handy-dandy Joque, or I would be a very, very sad Shilo owner. The Shilo comes in four colors, and the one you see in my pictures if called cashew.

More on the length: That’s six inches of dick that you’re stuffing in your pants. Six inches all the time. Not three soft and six hard. It can seem overwhelming at first if your last packer was comparatively shorter and much softer (as mine was).  Your best bet with the Shilo is to tuck it between your thighs. When I was wearing the Shilo with the Love Bump, tucking the Shilo between my fat thighs was somewhat uncomfortable.  The Love Bump was just in the way. If you’re going for realism, though, then you can’t get any better than that.

The silicone is awesome, too.  I’ve been told it feels comparable to VixSkin, and once I got a VixSkin toy of my own I realized that was true.  I also own a Tantus Cush O2, and I can tell you that outer layer of the Shilo is considerably squishier than the Cush.

When I inserted the Shilo, the material felt great.  That squishy outer layer is pleasant, and the head is kind of pronounced, which is wonderful when you’re thrusting.  However, here’s where the “seems ingenious for an insertable toy” thing comes in.  If you’re using the Shilo as a strap-on with a partner, the posability isn’t much of a problem – you can just keep the toy rigid with your hand.  If you use the Shilo on yourself, there’s going to be some fumbling, because that bendable rod in the core will try to bend as you push the toy against yourself.

Do I think the Shilo is worth it?  TOTALLY.  I haven’t sampled enough packers to call the Shilo the ultimate packer, but it’s pretty freakin’ awesome.  If you’re looking for gender expression tools you can pack and play with, I urge you to pick up the Shilo and the Love Bump at Shevibe. My Shilo came in the color “cashew,” but now they make awesomely-colored versions like a Shilo in blue and yellow and a Love Bump in rose gold. 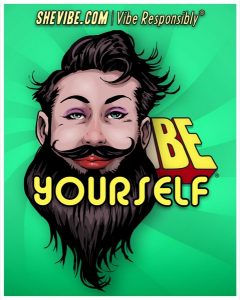