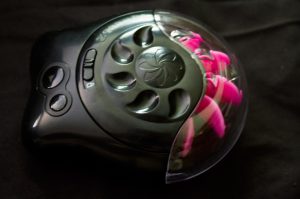 When I pulled the Lovehoney Sqweel out initially, I was surprised at how big it was (Epiphora called it a vulva hog), and I was also like, “Oh shit, it has a user guide. Either this guide will go to waste, or this won’t end well.” And it turns out that the user guide didn’t go to waste, because I needed it.

I thought I only needed two AAAs, and I was very disappointed when it didn’t work once I had inserted them. Turns out that you need three. Once I put the batteries in, the Sqweel started automatically (probably because I pressed each and every button several times to see if it needed batteries) and I was like, “OH GOD, HOW DO I TURN IT OFF?” It didn’t take long to figure out that you have to hold down the “on” button, but it was still surprising when I hit the on button and the thing sped up instead of turning off.

The point is, there was a lot of yelling when I unboxed this toy. There’s a little lock switch on the device and, before I read the user guide, I flipped it and was shocked as hell when I pulled the front panel of the toy off.

Now I have a confession… I cannot use the Sqweel.

Well, that isn’t true. I can use the Sqweel, but only with help.

I was seduced by the item’s description. 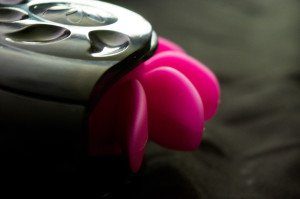 You can imagine, then, how distressing it was when I couldn’t quite part my labia enough for the Sqweel to work. I could spread myself a little bit with one hand while the other held the Sqweel, but that wasn’t enough to allow the tongues to rotate. I tried a couple different positions. I tried to spread myself with both hands and leave it sitting in front of me, but it wouldn’t stay in place well enough without me pushing it toward my body.  All that waiting and I couldn’t use it.

I was pretty depressed. I have a very complicated relationship with my vagina, and the amount of time I have spent wishing that I could sew it shut or swap it out for a penis is… extensive. Being unable to use a toy because of my shape was infuriating, but all my anger was directed at my vulva and myself.

I should have been more conscious of my anatomy when I was considering this toy. If you have really prominent or fleshy labia that you have to hold back to allow access to your clitoris (I have what some might call a “fat cunt”), then the Sqweel isn’t the toy for you if you plan on using it alone. I hate to be the one to tell you that, but I don’t want you to spend $60 only to find that you can’t use the Sqweel without another person present.

If you have labia that will stay back when you push them back, you’ll probably have no problem with the Sqweel.  Similarly, if your labia don’t conceal your clit, you’ll probably be fine.  You probably also want to have a decently-sized clitoris to use it.  I have a relatively small clitoris that takes a while to get engorged, so the Sqweel was not the perfect toy for me, because it didn’t even get to my clit half of the time.  I also have a vertical clitoral hood piercing that’s a little bit long, and so I was terrified that the extra length of my barbell would get pulled into the Sqweel.  It didn’t, but the concern was very real.  The toy didn’t yank anything out, not even pubic hair, despite that being one of Epiphora’s complaints about it. 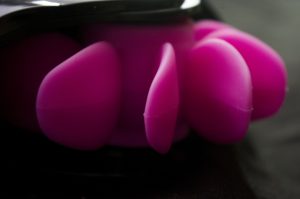 Depending on where you hold the Sqweel, it also tickles a little bit.  The entire thing was just… okay.  I said, “God, that’s WEIRD,” repeatedly during its use.  I imagine that I would have gotten more out of it if I had a more prominent clitoris.  The unique sensation seems like it would have been stellar if the Sqweel was capable of stimulating me more.  But with my clitoris being what it is, I was not blown away.

Since I can’t use this toy on my own (not the toy’s fault) and my clitoris isn’t a good size for stimulation (also not the toy’s fault), I’m probably not going to pull out the Sqweel very often.  I might give it a go a few more times in the future when the mood strikes, but because of the circumstances, the Sqweel pretty much can’t earn a place in my heart.  And that honestly makes me sad, because there aren’t many things like the Sqweel on the market.  I can only recommend this toy if your anatomy meets certain requirements.  If you’re interested in trying it out, you can get it here.  If the toy doesn’t work for you, Lovehoney has a very generous 100 day return policy, so don’t feel like you’re shit out of luck if you try it and don’t like it!

Thank you, Lovehoney, for sending me the Lovehoney Sqweel 2 to review!