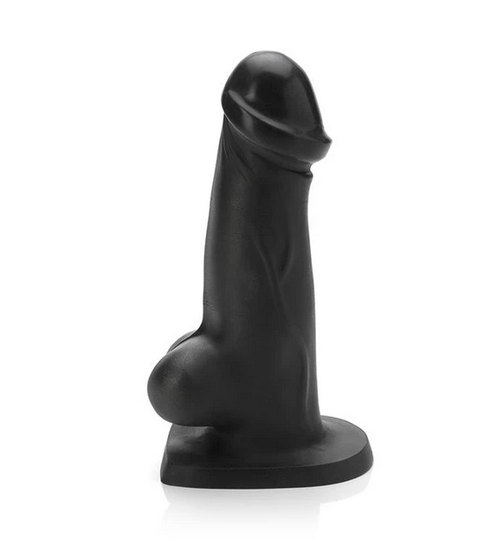 The good news is that I did conquer it. It was actually not difficult to get in because of the size with the progression of toys that I used. I used the OhMiBod LoveLife Adventure, then the Cush O2, then the Tantus General, then the T-Rex.

It worked like a charm at first, but pushing in the T-Rex further in was an event. It was kind of like going downhill on a roller coaster… and then being jolted to a stop. When I was putting the head in it felt really great, and then the scraping started. The silicone of the T-Rex is pretty solid and the minute the pronounced ridge of the head came up against my pubic bone it scraped against it. When I pulled the T-Rex back out it scraped against my pubic bone again, and worse – the ridge caught against my bone. It was not good times, people. It was bad times. I tried this thrusting motion a few times before I decided that this was not a thrusting dildo.

I’ve had a few more orgasms with the T-Rex, and each one has been just as uncomfortable as the first. I’m not sure what I’m doing wrong, but I have to say that the unpleasantness of having my pubic bone scraped has well and truly convinced me that I have no desire to give birth… like, ever.

I think the discomfort is because of how firm the toy is. Unlike some of Tantus’ other large toys, the T-Rex isn’t made out of that neat dual-density-feeling stuff where the outer layer of silicone has some give to it. Instead the T-Rex is completely solid, and what’s more, it’s straight, not curved in any way. Make no mistake, the quality of the silicone meets the standard that I’ve come to expect from Tantus – high-quality, flawless, and it feels great to touch. It’s not a quality issue, it’s entirely an issue with the design conflicting with my anatomy.

I knew the T-Rex had mixed reviews for vaginal use, but Ninja Sexology seemed to like it well enough, and Ruffled Sheets gave it a great review for anal use! I still wanted to try it vaginally for myself. That ridge in the head looked like it was going to be amazing. Oh Past Sugarcunt, if you only knew what you were asking for. While I love the way the T-Rex looks, the scraping was just unpleasant. It was all I could think about while I was using it, and that’s absolutely the last thing I want to be focused on when I’m trying to get off.

Ultimately I think that the dealbreaker was the combination of the hard silicone, the girth, the lack of a curve, and that huge ridge in the head. As individual elements I know that these things can be enjoyable, but I don’t think that this particular combination is for me. Now the question of, “Can I really brave the T-rex?” is answered. I can. I just choose not to do it anymore.

Thank you, Tantus, for providing me with the T-Rex in exchange for an honest review!