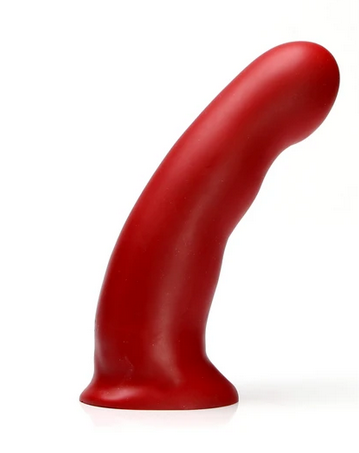 I don’t recommend just trying to stick the General inside yourself first thing. It doesn’t have texture anywhere near that of the Rippler or the Diving Nun, but a 2” diameter can be considered somewhat sizeable, even though it starts at 1.75” at the head. Do yourself a favor and size up just in case. I warmed up by going from the LoveLife Adventure to the Cush O2 to the General and found the progression to be quite comfortable, but given that the Cush and the head of the General are the same size I probably could have skipped the Cush and moved on to the main event more quickly.

I used the General vaginally and found it quite pleasing. The General’s gentle, full shape and slight curve gave me a really pleasant sensation of being full. The tip did hit my G-spot, and I felt the full effect of that by slowly thrusting it into me. As much as I love texture, I wasn’t disappointed by the General’s smoothness. It lends itself well to fucking yourself at any speed, and it was also really pleasing to keep inside myself and flex my muscles around. The girth is a beautiful thing.

You can get it from SheVibe.

Thank you, Tantus, for providing me with the General in exchange for an honest review!