Let me tell you a story about one of the worst things that has ever happened to my vagina.

I can promise you that it does not involve childbirth, but if you’re at all squeamish about or triggered by vaginal injury/tearing of any kind, then you probably do not want to read this story.

I’ve mentioned previously that I’m hard to get off, and producing an orgasm for me is a huge ordeal for the fingers, tongue, and any other appendages with nerve endings that may be put to the task.  After 20 minutes of working me over to no avail, my ex decided he was going to improvise and insert something to help him get the job done, lest his fingers organize an extended strike because of inhumane work conditions.  The tricky part of this was that there was nary a dildo to be found, because my sex toy obsession was restricted to online window shopping at the time.  So let’s think of some basic household objects to slot into the equation of x + condom = insertion, shall we?

For the sake of this article, I really did try to think of some things.  Here are some of the first suggestions that the internet offered up when I googled this question:

Ex also knew someone who masturbated using a handful of markers, but we weren’t even going there.  Crayola products are just about the only childhood relics that are too sacred to go in my vagina.  (Although they do have a somewhat large, crayon-shaped crayon sharpener that I just had a mental image of fucking myself with.)

There I was, staring at my ceiling, soaking wet between the thighs, while my boyfriend trashed my room, searching desperately for something that he could put in my vagina with the minimal amount of effort.  Guess which of the objects from the list above he found?

He found a wooden foot roller.

If you’re blanking when you try to conjure a mental picture of it, let me help you out.

Okay.  Maybe those of you with more experience and wisdom (and who had received a comprehensive sex education that covered safe insertion) can look at that picture and go, “Maybe that isn’t the best idea.”  But for those of us who didn’t have the benefit of that, or at least some common sense, this looked like a totally viable dildo.  “Hell, honey, it’s ribbed for your pleasure! “  (Not a direct quote, but I know we were both thinking it.)  My foot roller wasn’t tapered as significantly as the one pictured above, but beyond that, it looked pretty much exactly like it.  He found it on my windowsill.  He asked me what it was.  I didn’t know.  What I did know was that I had received it as part of a massage/pedicure set.  I knew that it had a somewhat phallic shape.  I knew that it was made of smooth, seamless wood.  I also knew that I hadn’t seen my ex in almost four months and was ready to devour him, and because of that, everything else that I knew took a backseat to the fact that I knew that thing was going in my vagina.

Oh my god.  It was good.  It was so good.  Intercourse had never felt that good.  I am not exaggerating.  I was in ecstasy, with that foot roller thrusting in and out of me and a devoted tongue on my clit.  It wasn’t very long.  It didn’t need to be.  It was amazing.  I genuinely have no real way to describe how it felt, because I have no basis for comparison in memory.  I couldn’t get enough of the thing, and I was so wet,

my cunt was on fire my back was arched my toes were curling my right leg was twitching and that telltale cramp was forming in my thigh and oh my god, yes, yes, YES, I… flopped my spine back against the mattress, uncurled my toes, stilled my leg, and I was PISSED.

Fire spurted from my nostrils as I sat up and grabbed his hair in a death grip, growing to twenty-times my size and towering over him.

The pleasure HAD NOT RESUMED.  His words were drowned out as Latin choirs sang in the distance.  My bed became a slab of ice and the temperature was sub-zero.  My room was now Cocytus, and I was buried in the middle of it, gnashing the teeth of my three mouths.

Our sexual encounter quickly devolved into a non-kinky shouting match.   Finally, tossing aside his fear of spooking me, he showed me his hands.  It looked like he’d fingered Carrie after the prom.  “LOOK.  Are you okay?”

It was right about then that I got a little nervous.  I was accustomed to a tiny bit of bleeding every now and then, but outside of menstruation, this was more blood than I’d ever seen come out of my vag.  But it didn’t hurt… in fact, I was feeling no pain at all, which is why I hadn’t realized how serious the situation was.  I rushed to the bathroom and held some toilet paper to my cunt until the blood flow was minimal, and as I was pressing it there, the pain set in.

Let me tell you about the pain.

My cunt was on fire again, but it wasn’t the good burn from earlier – it stung.  It’s been a few years, but I vividly remember sitting on my toilet, trying not to cry because of a mixture of fear and pain, wondering if someone had turned a hive of pissed-off, razor-wielding hornets on my poor pussy.  It was scary.  I had no idea how bad the damage actually was, I just had some blood and pain as indicators of what I had done.  I felt confused, frail, vulnerable, damaged, and above all, foolish, because I thought it would be okay to put that thing in my vag.  Ex was pounding on the door, asking if I was okay, and all I could do was sit there and sniffle.  It didn’t take too long for the bleeding to slow down, and while I spotted for several days afterward, the damage wasn’t severe enough to warrant a doctor’s visit – at least, that was my opinion at the time.  In retrospect, I wish I had gone to the gynecologist just for peace of mind, if nothing else.  I still have questions about it.  Exactly what kind of damage did the edge of that thing cause: scratches, tears, scrapes?  Could it have changed the internal topography of my vagina?  Once I had healed up, I was convinced that my innards felt a little bit frillier than they used to, but that was an entirely subjective judgment from someone who didn’t often penetrate herself with her fingers.  Could I have gotten an infection if I hadn’t taken better care of it?

Now, do you want to know the scary part of this story?  I was the most sexually-educated person among my friends for years, and I thought that this roller would be okay to use in my vagina.

THIS IS WHY WE NEED REALISTIC, COMPREHENSIVE SEX EDUCATION THAT DOESN’T DEMONIZE PLEASURE AND ACKNOWLEDGES THAT ALL KINDS OF SEX OTHER THAN PENIS-TO-VAGINA INTERCOURSE HAPPENS.

When we’re showing them how to put condoms on bananas, if we’re even showing them that, then we also need to be teaching young adults what sort of things should not be put into their orifices and why, because they’re going to experiment with that whether you address it or not.  Instead of telling them not to have sex, tell them how to have sex safely and responsibly.  Instead of telling them not to masturbate, tell them how to do it safely and responsibly.  Even the teenagers who know more about sex than their peers (like I did) can learn how to do things more carefully.  If someone had told me that I shouldn’t put anything into my vagina until I made sure it had a smooth, rounded edge, I would have told my boyfriend to go fuck himself with a chainsaw before I let him put that thing inside me.

Do you know something important that I learned from Girl Scouts?

It was to be prepared.

Do you know what I learned from this experience? 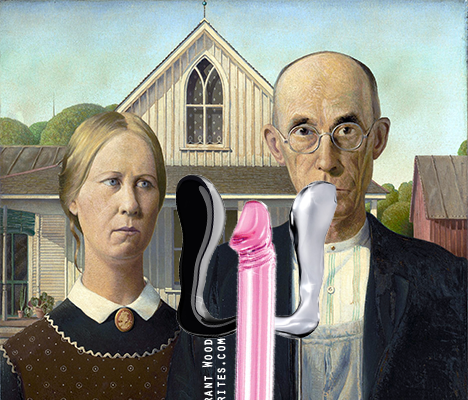