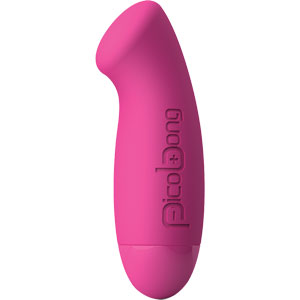 Picobong Kiki: What Have I Done?

“…do I actually have this on my crotch?  Yes.  Yes, it’s definitely touching me.  And I’m definitely holding it in the general region of my clit, but… is it on?  Of course it’s on, I can hear it.  I.. I think it’s touching my clit.  WHY CAN’T I FEEL ANYTHING?”

That’s pretty much everything you need to know about the Kiki Vibe from Picobong.  Picobong is a new, more affordable line from LELO, and so I expected… something from this toy.  Something other than what I was given.

I swear to god, I thought this thing was going to rock my world.  Just looking at it was like finding out that you can hold the shower head against your genitals.

So, I tore the Kiki out of the box, rinsed off the smudging that occurred from the black cardstock-like paper that held it in place, and hit the + button.  I was greeted by a vibration speed that I will dub, “Are you fucking kidding me?”

I hit the + button a couple more times.  Nothing happened.  I held the + button down, and the vibe began speeding up.  That was more like it.  Sort of.  I was having some trouble figuring out the vibration patterns, though.  I figured I’d just give it a test run anyway.

It comes with a manual.  Just read the manual, y’all.

For starters, the manual says that rechargeable batteries result in reduced vibration intensity.  After I took the Kiki on its test run, I read that warning, and I was like, “Oh, THAT’S my problem!”  But no.  No, that wasn’t my problem, because I wasn’t using any of my rechargeable AAAs in the Kiki.  It was made this way.  The flaw is not in my battery choice.

Oh!  And one last complaint… more of a pet peeve, really.  Picobong’s box (and their site) says that the Kiki is great for C-spot stimulation.  Where the hell is your C-spot?  Can you show me?  I’m pretty sure they mean the clitoris.  That is not a “C-spot.”  It is a clitoris.  STOP, Picobong.  Stop that.   I hate that term.  “C-spot?”  It’s not a spot.  My vulva is not a Dalmatian.  It’s a clitoris.  It’s filled with twice as many nerve endings as the penis.  It is not a “spot” like the coin-sized G-spot.  It’s more of a nub shape on the outside, at best.  And it has a name.  The clitoris.  Don’t try to change it.  Next, you’re going to be selling me dildos and telling me they’ll stimulate my “v-spot.”

Also, they say you can put the Kiki inside yourself to stimulate the vaginal opening.  Don’t make me laugh.

I don’t know why you’d want to, but if you’re so inclined, you can get a Picobong Kiki from Shevibe!